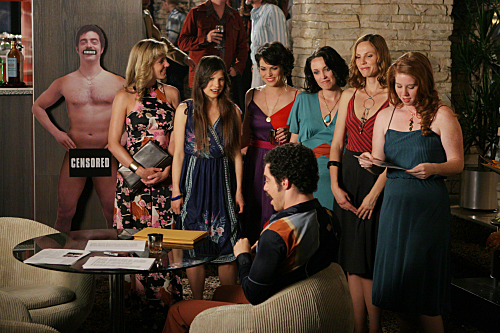 First it was Dirty, Sexy, Money, now I find out that Swingtown is canceled.

Swingtown was a short-lived show on CBS about swingers (but not really) in the 1970s. The characters were fun, the production design was excellent (you really felt like you were in the ’70s!), and the politics were smart (lots of issues around “women’s lib,” censorship, Nixon, etc.).

Imagine my sadness when I found out via the Swingtown wiki page that it’s effectively been canceled:

Cancelation
Show admitted that the series is canceled. [1]

“TVGuide.com: Is it safe to say that Swingtown is all swung out? Show: Yeah, unfortunately. I mean, they haven’t released me and they haven’t made any official statements yet, but our contracts are all up in December. They’d have to have us back working before then, and I don’t think it’s possible to do that.”

I’ve been hoping that the limbo-status of the show for the past few months has meant that it might be returning somehow magically. Looks like that probably isn’t the case…

At least I can look forward to the complete first season arriving in my mailbox sometime next week.

My friend Jennifer broke the news (via Ausiello) that Dirty, Sexy, Money is over… or will be, at the end of this season.

Although this show wasn’t quite as dirty or sexy or money as the title makes it sound, it was good. I loved the cast and the overarching mystery (“Who killed Nick’s dad?”) is the kind of stuff I love (a la the mysteries that encompass each season of Desperate Housewives). The show was also groundbreaking in that one of the major characters was an MTF.

I won’t miss Eli Stone — I watched two or so episodes of it and hated it. I hear from everyone that Pushing Daises is awesome but I never watched.

Let’s just hope they don’t cancel my other hanging-on-by-a-thread shows like Terminator: The Sarah Connor Chronicles or Friday Night Lights.